The Spirit of South Africa in the Time of COVID 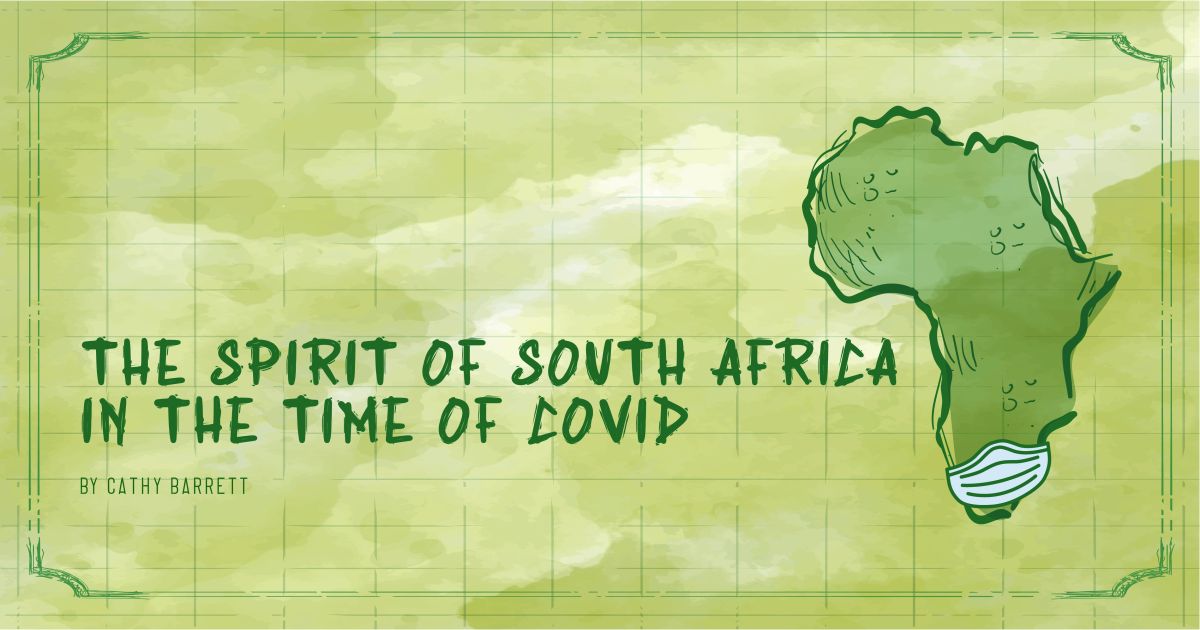 In March of this year, I returned to my home country of South African to attend my 40th high school reunion. It had been planned for months, and I was so excited to see old friends again. Then, COVID-19 hit, and I found myself traveling across the world during a global pandemic. I caught the last plane out of South Africa as the country shut down to prepare its infrastructure for COVID-19. This blog post is a reflection of the amazing experiences I had over those 10 days. It was a journey like no other I had ever experienced.

March 15: Soon after my husband and I landed in South Africa, we watched an eloquent and thoughtful response to COVID-19 by President Ramaphosa on national TV. The number of cases in South Africa reached 60, and we wondered what lay ahead of us during the rest of our two-week stay.

March 16: After arriving in Cape Town on a clear breezy day, we drove through the exquisite Sir Lowry's Pass, headed for the seaside town of Hermanus. Signs of COVID awareness were everywhere as we stopped at a local farm stall and were doused with hand sanitizer. We had an amazing two days with my closest friends from high school at a rental house. However, all of us felt an underlying sense of unease. Talk of a possible shutdown ahead. What that would mean for our friends' livelihoods; would we have problems getting home; should we even be seeing friends?

March 18: After a quick stop in Greyton to see an old IBM friend and have lunch at a magical wine farm called Creation nestled in the hills above Hermanus, we traveled back to Cape Town to the news that the reunion had been canceled. It was the right decision, but devastating after months of planning. We made the best of the next few days, enjoying some beautiful drives around what is arguably the most beautiful city in the world, and hiking up the back of Table Mountain to enjoy more amazing views. There were plenty of people out and about, but everyone was cautious and kept their distance.

March 20: After serious discussions the night before with my brother with whom we were staying, we felt it was wise to register ourselves with the US Embassy in case the situation escalated. Cases were rising slowly, but it was clear that South Africa was taking the COVID threat seriously. Several calls to the US Embassy over the next few days yielded no response, so we started down another route….our Maryland Senator Chris Van Hollen, whose office was immediately responsive and told us to stay in touch and they would reach out to local authorities.

March 21: The internet can be cruel! The Atlanta Journal reported that Delta was canceling all flights from South Africa starting on March 23. Our flight was scheduled for March 27. There was no word from Delta about this. We turned our attention to finding alternative flights home.

We found a flight on Emirates for the 23rd and settled down to enjoy our last two days with family, on a very abbreviated vacation. 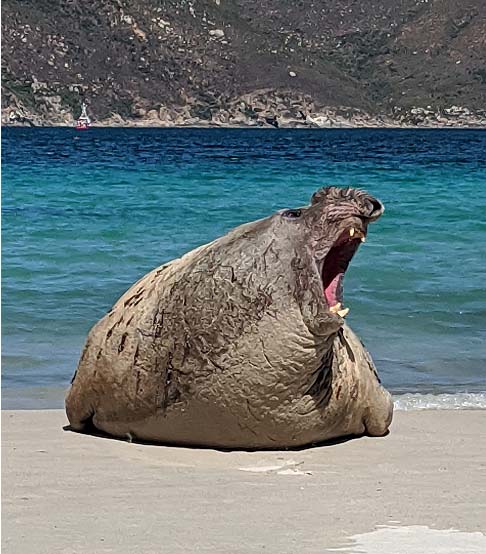 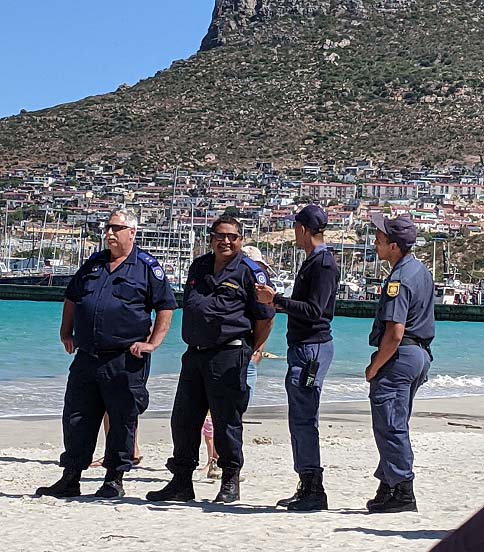 Not social distancing, but keeping the elephant seal safe

March 23: We said our goodbyes and headed to the Cape Town airport to be met with complete chaos as flights were being canceled. We anxiously walked over to the Emirates check-in.

"What flight are you on and where are you headed?" the agent asked.

"We are flying to Washington, DC," we responded.

“Sorry, we cannot allow you to board. The incoming flight is delayed by 5 hours and you will not make your connection. We are canceling all flights starting on March 25, so you have no way of getting home. Goodbye.” No other flights going out that night had any seats available. Frantic calls to find a way via Europe yielded no results, and we headed back to my brother’s house, with the prospect of a long stay in South Africa ahead of us.

8 pm: Score! We booked a flight on British Airways via London for March 27. Thank goodness for an increased limit on our credit card! This was our third flight reservation.

7 pm the same day: President Ramaphosa announced a shutdown would occur on Thursday, March 26 at midnight. After some confusion, it was determined that flights could leave as scheduled, but otherwise, everyone was confined to their homes. This announcement started my connection with a new Twitter family. A growing group of us were looking for flights home, had questions about being allowed to travel to the airport, and sharing joy when someone had managed to find flights. The support among us was inspiring: rides were offered, food was sent to a family of eight who was stuck in an Airbnb, and it was comforting just knowing you were not alone in the anxiety of the moment. We had a flight. We were going to be fine.

But now we were compromised. We had been In crowded conditions at the airport, and could not risk passing anything on to the rest of my family. We spent the next 48 hours in isolation at the other end of the house, trying to get some work done, enjoying some close-up photography, marveling at the incredible views Hout Bay has to offer as the mountains surrounded us, and munching on passion fruit that was oozing fruit on a vine on the deck. Truly a bittersweet time.

March 25: We decided to pack and organize our things for Friday. I usually pack with ten minutes to spare, but for some reason this just felt right. Senator Van Hollen’s office called at 8PM and we assured them we were headed home on Friday and would let them know if plans changed. Settling down for the night, we read a bit and did the usual check on news which included Twitter. I had to read the messages several times before I understood what I was reading. There had been a change. No flights would be allowed out after midnight Thursday. We frantically contacted British Airways but to no avail. There was no way to get through on the phone and our online reservation was locked. Again, the Twitter family kicked in. We found out one flight was moved forward from Friday to Thursday from Cape Town, but sadly not ours. Then someone messaged me on Twitter and told me to try to get to Johannesburg, as a new flight had just been added. It was now 11PM on Wednesday. The only way to get there was a 15 hour drive, and the flight was in 23 hours. We woke my brother, begged the use of a spare car, booked the flight and by 1:30AM we were on the road.

This was the part of the trip that was truly inspiring. As we sped through the darkness, very anxious at first, this anxiety soon gave way to a sense of adventure and peace. We missed seeing the beauty of the Cape Mountains, but the sunrise revealed the absolutely beautiful landscape of the Karoo, with misty clouds shrouding the small hills around us. The trip was punctuated by the occasional stop for gas, where everyone was so kind and became our cheerleaders as we slowly inched our way up on the map. Entering the Free State and then Gauteng, the landscape changed to intensely yellow grassland and stunning blue skies. I cried. I had missed this country so much. The intensity of the experience really hit me when I realized the car we were driving in was my mum's 20 year-old Audi, her trusty car that would get her through anything. She was still looking after us all these years later, and we sensed her right there. 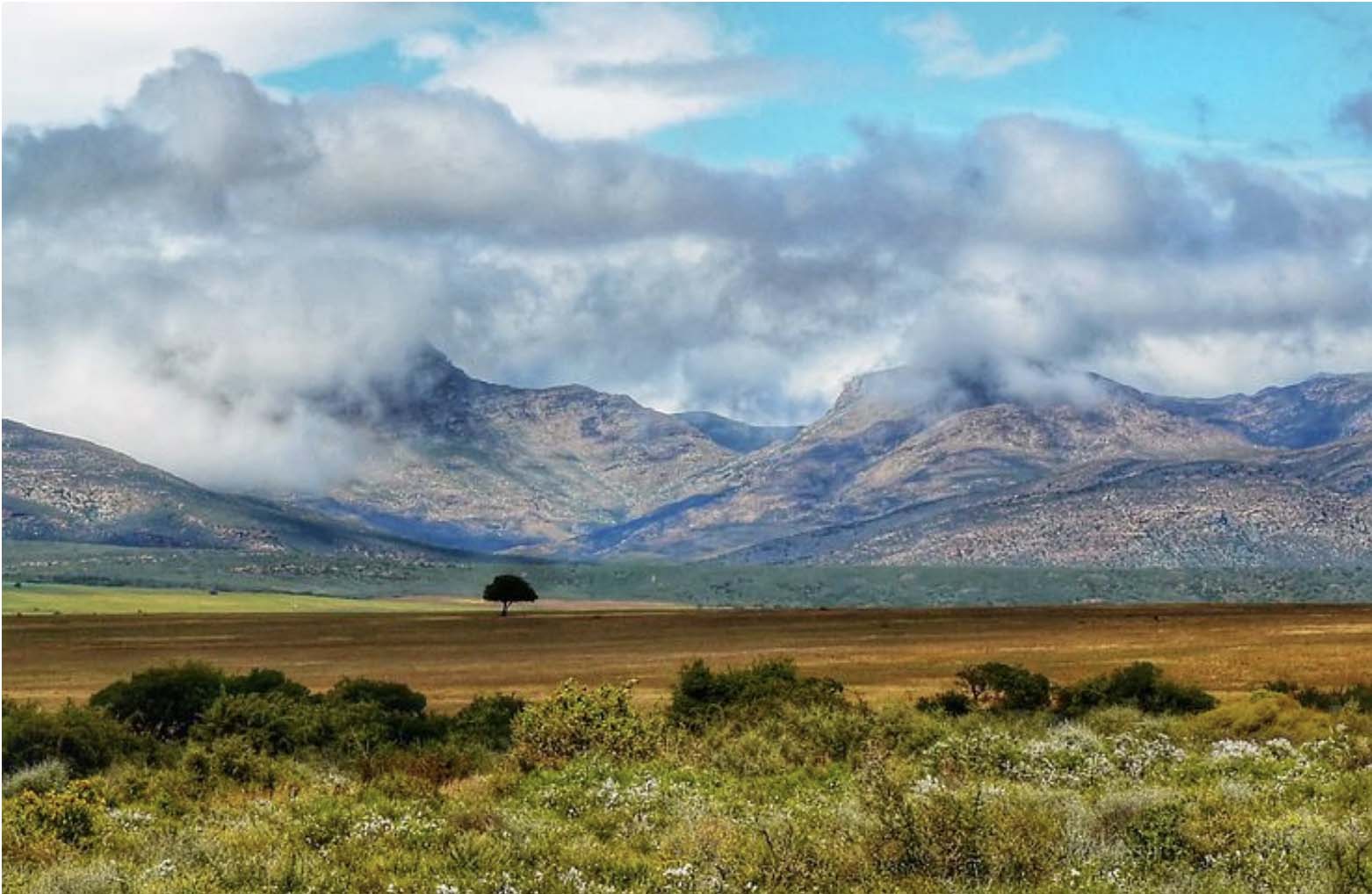 5 pm the same day: After an anxious final hour nearly running out of gas, we finally arrived at my nephew's, where we were able to leave the car. We were so ready for a quick shower before our long flight, but were greeted with the news that not only did they have the COVID crisis, but the water mains had burst and there was no water. We gratefully drank some tea and the most enormous brownie made by my 3 year old nephew in our honor. Then it was back on the road via Uber to get to the airport by 6:30.

The airport was oddly quiet. It was the last night of flights, and they were all coming to an end. The international departures had three flights left: one KLM flight and two British Airways flights. Ours was scheduled for 10:10. Inside the scene was very different, as we joined the line to check in and realized our line was dwarfed by the line next to us. We soon learned that was the standby line, with well over 300 people hoping to snag a seat to somewhere. A moment of panic ensued as my passport was checked, only to be told South Africans could not leave. The green card did the trick. We got safely through security and waited for takeoff. A quick check on my Twitter family revealed not everyone had made it on a flight. The family of eight was stuck in Cape Town.

At 11:10PM with just 50 minutes before the runway was closed, our flight lifted into the air and the sparkly lights of Johannesburg bade us farewell. The trip home was uneventful. Heathrow was a ghost town. However we did snag a beer for breakfast (which was divine)! Landing in Detroit, there was barely an awareness of COVID, with all the airport stores open and life strangely going on as normal. We knew that was not the case when our last leg was just us and seven other passengers. 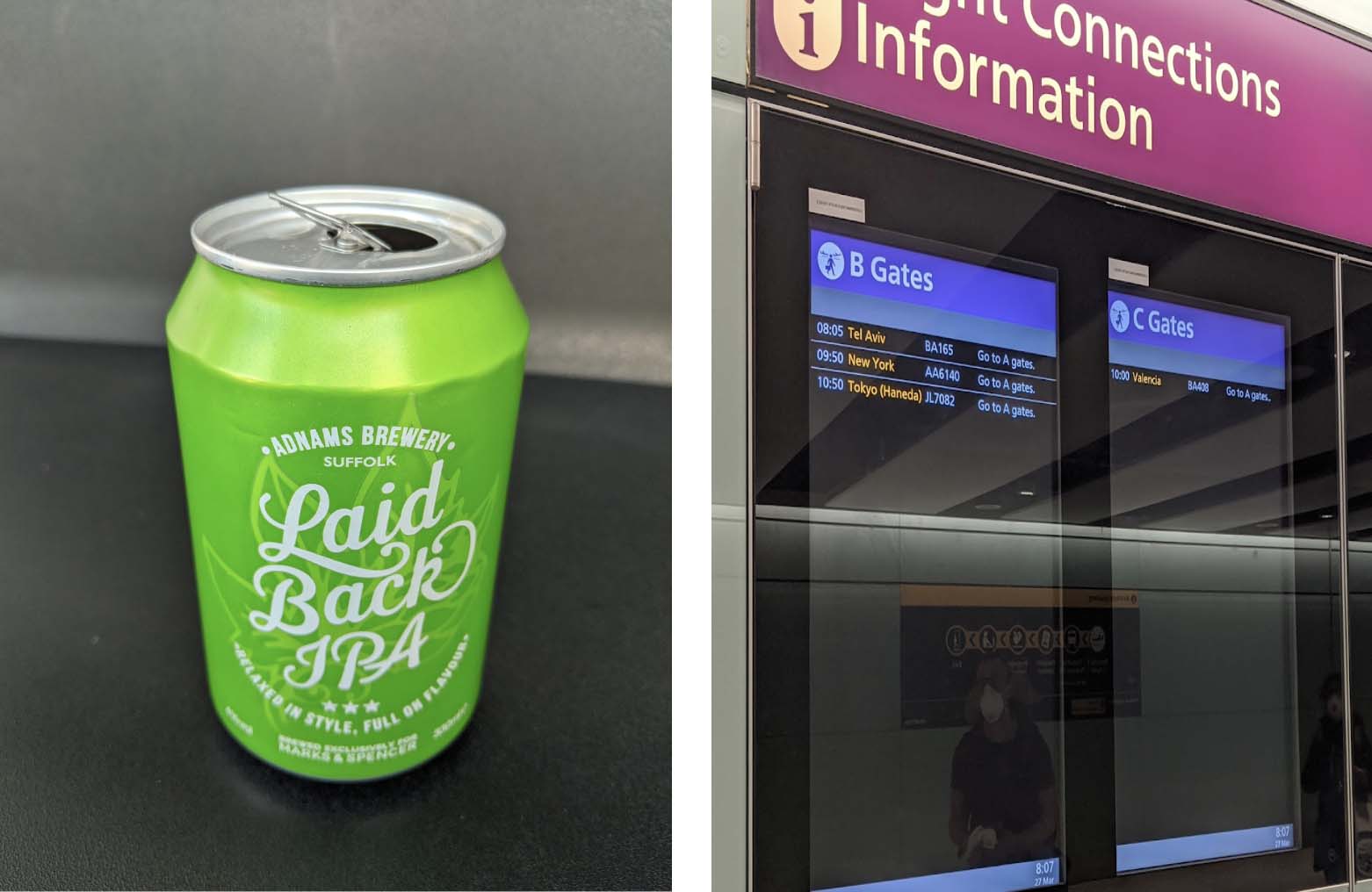 Arriving home was the start of a two-week quarantine and a time to reflect on the amazing kindness of so many strangers, family, and friends along the way. South Africa is truly a country of great beauty, not just in the natural landscape but in the spirit of the people. It’s a place where you feel welcome, the music is part of your soul, and the smiles light up your day. I am truly grateful to everyone who helped us get home….my family, my friends, Senator Van Hollen’s office and British Airways for adding that very last flight out of the country. 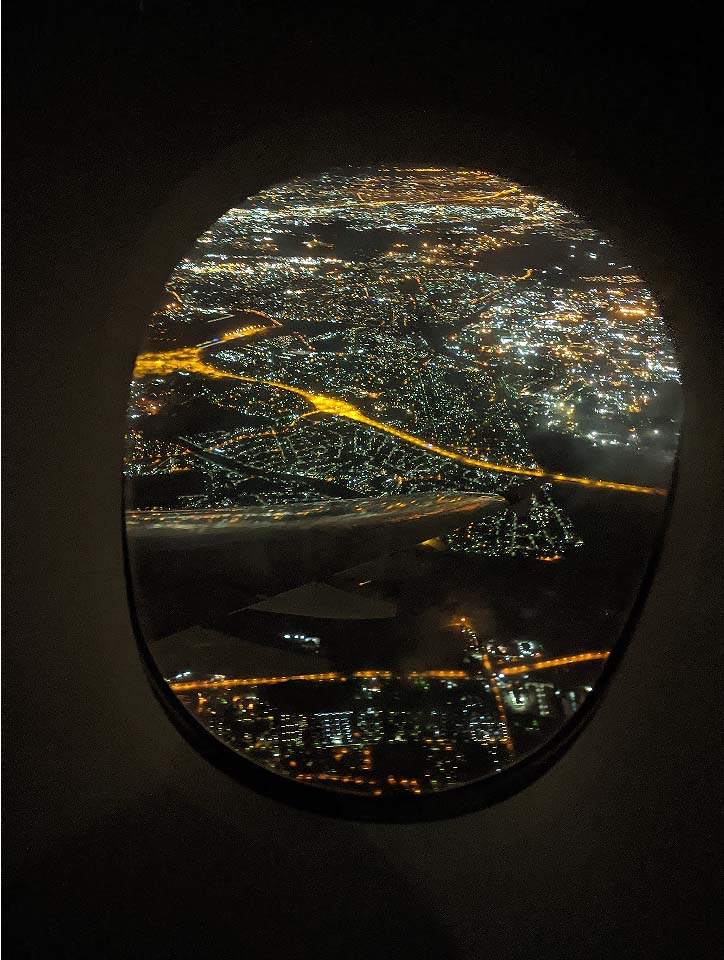 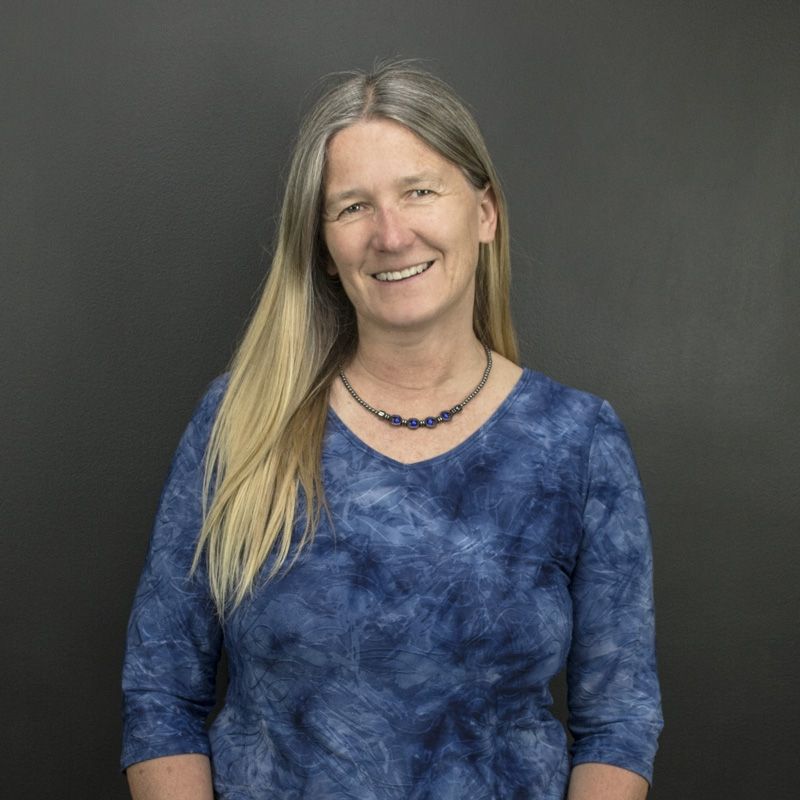 As Vice President of Finance and Operations, Cathy handles LMD's finance, business planning and budgeting, and IT functions. She also plays a critical role in LMD's strategic planning and frequently consults on LMD's accounts as a systems engineer. Her information technology skills include data... END_OF_DOCUMENT_TOKEN_TO_BE_REPLACED